The following are the limitation of key column in an index:

The advantage of using included columns is as follows:

The syntax for creating an index with included column is as follows:

We can also create index with included columns using SSMS as shown below:

Expand your DB > Table name > Expand index node > right click on index go to properties. Now click on included column in Select a page and choose the column you wish to include. 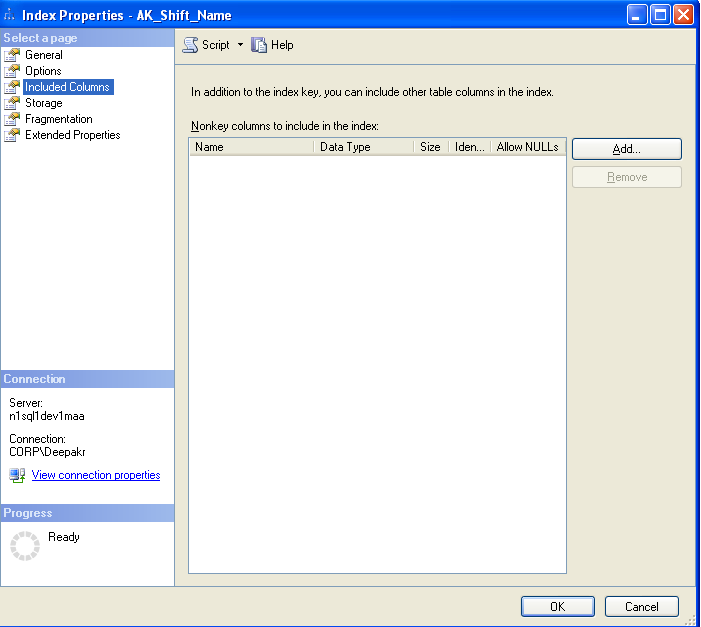 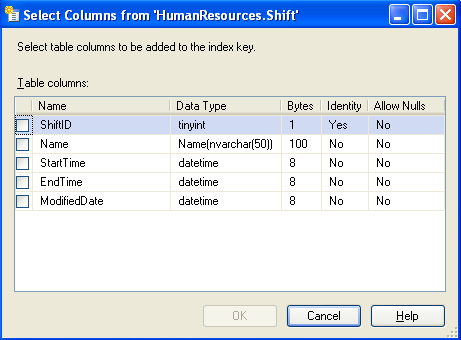 I tested the usage/advantage of included columns by creating a table called testmember which has 1.5 million records with the following fields:

We already have a NC on EmailAddress, Firstname.

I am running the below query,

Without any NC in name field in the table the following is the IO,

I have created the below NC on testmember table

Index size after creating a NC without included columns

I ran the following query and verified the execution plan which is shown below:

As you can see there is a index seek on the Non-clustered index (NC) on the predicate name however since the existing NC index on name field couldnt cover the query and hence the optimizer had to use the Clustered index Key to lookup for the rows which were seeked for the predicate name=teach2. The key lookup is quite an expensive operation, if many rows were returned by the NC seek, for each and every record returned the query optimizer had to lookup the clustered index key to fetch the record and this involves a lot of IO.

After dropping the above index and creating an index with included column the following is the IO,

The index size after creating included column is as follows:

The following is the IO involved for the below query and corresponding execution plan is shown below:

So we can see that creating an index with included column helps in reducing the amount of IO involved by covering the query. In the above case the logical reads has reduced dramatically by 200 times of the original value.

Now I am dropping the existing index with included columns and creating a new one with one more field called testindex which is having char (500) as data type.

Basically the above index will cover the below query and will use an index seek:

However if you see the index size of NC, it is as follows:

We can see that the NC size is close to 5GB. Even though we get performance improvement we need to use the included columns judiciously.

How to find included columns:

We can use the catalog view sys.index_columns to retrieve this information:

Microsoft Most Valuable Professional (MVP) award-winning Database Designer with 5 years of experience in designing, administering, developing & performance tuning relational databases and data warehouse. I possess strong leadership skills experience by serving as the Chapter Leader of Professional Association for SQL Server (PASS) which has around 50 members. I am passionate about solving business problems using my technical skills and hence I am interested in the field of Technology Consulting in Information Management.

View all of Deepak's posts.

Find Indexed column details in a database
I was looking for a script to find out the indexed column details as part of our migration. I tried to use sp_helpindex however it requires a obj...
Learn more
sys.dm_db_stats_properties DMV
Service pack 1 for SQL Server 2012 has been released on 9th Nov 2012. It took couple of weeks for me to install it in our servers. Before I settl...
Learn more
SQL Server 2012 Performance Dashboard Report
Performance dashboard is developed for SQL Server 2005 which provides useful information about the server, in simple it will give you an performa...
Learn more
powered by RelatedPosts