In my previous article on Diskspace Check via SQLServer will find only physical logical drives that is attached to the system i.e the drive which you see under my computer. Ive used this script in one of my client machine and found that this script is not capable to check disk space for mounted drives. Hence Ive written an WMI script and SQL Script (like version 1) to fetch both physical disk & mounted disk space details. I hope this would help most of the DBAs to monitor their mounted voulmes where they have hosted their database files.

In the script below Ive just provide you the output of total disk space, free space details. You can modify the SQL Script further to suite for your requirement.

To shown an example Ive mounted a drive to C:Mounted Drive folder and executed the script. 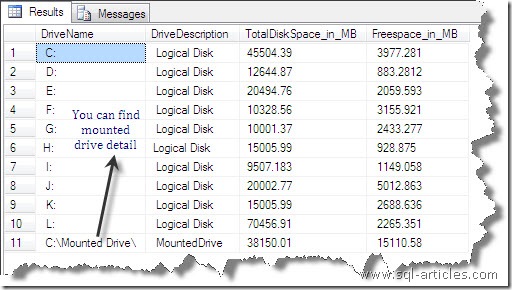